Prior to the dinner, US Ambassador Chas Freeman and Mr Ronnie Chan (Chairman of Hang Lung Group Limited and Co-founder of The Morningside Foundation) had a discussion on Sino-US relations. Ambassador Freeman is former U.S. Assistant Secretary of Defense for International Security Affairs. He was the main interpreter for Richard Nixon during his 1972 China visit and served as the Ambassador to Saudi Arabia during the Persian Gulf War in the 1990s.

Inspired by the insightful dialogue, the students had an enjoyable evening with much interesting conversation.

Suan Yeon commented that the gala was "meaningful since I could get ideas on the issue of Sino-American relations from different points of view - from the zoom talk to casual conversations with the College Master and invited students from different countries. The food was awesome and the intelligent group of people sharing their thoughts on global issues made me think more about the political position of Hong Kong and Korea - where I am from."

Thant Aung Hein thought the dinner "was the warmest Morningside family moment I have ever felt. I especially love that the Master made us engage in the talk by asking what each of us think of China's intentions. It is always great to listen to different perspectives. Overall, the dinner made all of us closer. As for the event, I was surprised by the amount of effort put in: from inviting great people to speak to the virtual displays between the parts."

Endria Hok Lam Tai commented, "It was my honour to attend this event hosted by the Asia Society upon the invitation of Morningside College. Reflecting upon the interesting conversation between Chas Freeman and Ronnie Chan, it was the first time I had considered the friction between the two global superpowers as rooted in cultural characteristics, namely the importance of 'saving face' in Chinese culture and the significance of the preservation of honour in American history. Overall, it was an invaluable experience to be able to discuss these important and timely issues with Professor Rawlins, Lalla, our Junior Fellows and other freshmen." 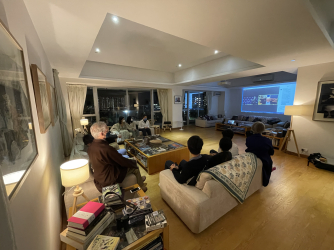